As there are almost 3,000 species of catfish, they come in an abundance of sizes. One of the smallest species is the Asian stone catfish which only reaches around 1.5 inches in length. In comparison, the largest type of catfish is the Mekong giant catfish. Like their name suggests, these behemoths can reach up to 10 feet (120 inches) long. That’s a pretty big size difference between the two!

The bigger types of catfish are an exciting species to run into for a lot of recreational anglers. They’re large, stocky size makes them a challenging fish to reel in, which adds to the thrill of the battle.

The anglers in this article were lucky enough to hook some gigantic catfish, which earned them international recognition and a world record. They had the equipment and the skills to match. Let’s take a look at the 10 largest world record catfish, credit where it’s due, catching these fish is definitely no small feat.

All of the catfish featured in this article are listed in the International Game Fish Association’s (IGFA) World Records Database.

As the largest species of catfish, the Mekong giant catfish is probably one fish any angler would struggle to reel in. However, in 2005, a group of fishermen in a small village close to the Mekong River in Thailand managed just that.

Not only did they hook this monster of a species, but the specific one they found is currently the biggest Mekong giant catfish ever caught. It weighed a hefty 646 pounds and measured 2.7 meters long. The sheer size of the fish made it take over an hour to catch.

Thailand’s Inland Fishery Department wanted to use the female fish in a breeding program, but it passed away before they got the chance. The fish was eaten, so at least it didn’t go to waste!

Fact: Mekong giant catfish are the biggest freshwater fish. They’re also the only species of catfish that don’t have teeth!

The largest channel catfish that’s even been caught hasn’t changed in over 50 years. In 1968, in the Santee-Cooper Reservoir in South Africa, a bulky channel catfish that weighed 58 pounds was caught. Unfortunately, the length of the fish was never specified.

Fact: Channel catfish come in an array of colors based on the type of habitat they are in. Some of the more common colors include olive, blueish-grey, and light blue.

A man named Jorge Masullo de Aguiar caught a huge piraiba in 2009 that ended up the biggest of its species ever caught. It was 2 meters in length, weighed 341.11 pounds, and was found in Rio Solimoes in Brazil.

It’s not unheard of for piraiba catfish to weigh more than 450 pounds, but a species of this size hasn’t been caught just yet. For now, Jorge Masullo de Aguiar is still the record holder.

Fact: The belly of a piraiba has been known to contain animals like dogs, cats, monkeys, birds, and other species of catfish. There are even legends that suggest that they can make a meal of a human!

In 2015 in the Po River in Italy, Dino Ferrari hooked a wels catfish so large he ended up on international news. The fish was 2.67 meters long and weighed 280 pounds.

Despite the impressiveness of his catch, Ferrari doesn’t hold the world record for the biggest wels catfish ever caught. That specific fish weighed 297.7 pounds.

Unfortunately, there isn’t a huge amount of information surrounding the world record biggest wels catfish. It’s featured as an official record listing on the International Game Fish Association website, but the details are limited.

Fact: ‘Wels’ is an old German word for catfish. This means the wels catfish is actually called ‘catfish catfish’.

In 2003, W. Moller hooked a sharptooth catfish that was 93 pounds in weight and 75 inches in length. It’s currently tied for the biggest of its species ever caught. The sharptooth catfish was caught in the Orange River in South Africa.

Fact: Sharptooth catfish have an accessory breathing organ located above their gills, which enables them to breathe oxygen directly from the air.

The world’s largest spotted sorubim catfish that was caught by rod and reel was over 20 years ago, some time in the 1980s. It’s not clear which lucky person landed this catch, but the catfish weighed 189.10 pounds and was 70 inches in length. It was found in Rio Parana in Brazil.

Fact: The spotted sorubim has a head that is three times longer than it is wide.

The world record for the biggest flathead catfish that’s ever been caught belongs to Ken Paulie. He reeled in this catch in 1998 at Elk City Reservoir in Kansas, USA. The flathead weighed 123 pounds and was 1.55 meters long.

Fact: The flathead catfish is thought to be the least attractive member of the catfish family.

You might already recognize the name Jakub Vágner. He’s the host of the National Geographic show, Fish Warrior, as well as other TV shows. He also has the world record for the largest goonch that’s ever been caught.

This beast of a goonch was 1.57 meters long and weighed 165.5 pounds. Vágner caught the fish in the River Ramganga in India in 2009.

Fact: The goonch catfish has many other nicknames, including ‘giant devil catfish’, ‘sand shark’, ‘river monster’, and ‘killer catfish’. This is because of its big teeth and aggressive personality.

Using a fiberglass Sportex rod, Gilberto Fernandes managed to hook an enormous redtail catfish in 2010 in  the Amazon River, Brazil. It weighed 123.7 pounds and was 1.408 meters long, which landed Fernandes the world record for the biggest redtail catfish ever caught.

Fact: Redtail catfish are commonly kept in aquariums as they are one of the most attractive looking species of catfish.

In 2011, Richard Nicholas Anderson hooked a gigantic blue catfish in Kerr Lake, Virginia, USA. This blue catfish was 1.45 meters in length and weighed 143 pounds, making it the biggest of its species ever caught.

It took 45 minutes for Anderson to reel in the fish. He wanted to place it in an aquarium as a local Bass Pro Shops retail store, but it ended up dying.

Fact: Blue catfish are one of the biggest species of Northern American catfish. They can live up to 20 years.

The anglers on this list caught some gigantic species of catfish that definitely earned them bragging rights to their friends and family. Maybe if you’re lucky enough, you might end up with a world record on your next fishing trip. If you’re aiming for breaking the record try brushing up your skills with this great set of catfishing tactics from CallOutdoors.

Did you enjoy  finding out about the 10 largest catfish ever caught? Let me know what you thought about it in the comments below! If there’s someone else you think will like this article, please click the ‘share’ button. 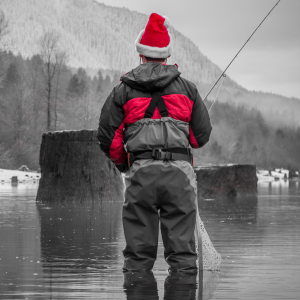 These Guys Watch a Buck Shed its Antlers Right in Front of Them!

PrevPreviousFamily Fishing Guide
NextSummer Camping Trip & Mosquitos: Here is How to Get ThroughNext
On Key