Ed Walker’s no stranger to angling or fishing tournament glory. He’s been guiding for 26 years with experience as a deckhand and a pier fisherman before that. With 18 IGFA world records to his name, over $500,000 in tournament winnings and having been named the Florida state champion freedive spear fisherman for 2010 and 2015, it’s clear there’s not much he hasn’t seen on the water.

That’s probably why he didn’t realize just how dangerous his battle with a monster king mackerel – the only one he hooked – during the King of the Beach tournament in Madeira Beach, Florida, actually was.

“Only kingfish we hooked in the tournament yesterday turned out to be a monster. Kept itself out of gaff range during the long fight. Realizing we may have the winning fish on the line I reached way out the very back of the boat and gaffed it in the back end as it was going away. I was instantly pulled overboard and out of sight. 15 feet down I held on while fighting against what sure looked to be a tourney winner. I got down to where I could see the ledge while trying to fight back against the beast on the other end of the 12 foot gaff. I managed to kick back to the surface (in rubber boots) and expected to feel someone grab the gaff out of my hands ….but the boat wasn’t right there. Since they were not sure where I was Fred Hosley and angler Andy Travnicek wisely didn’t have the props turning. Finally we got gaff, fish, and me back on the boat. Boat scale said 48-50 lbs – quite often a winner at King of the Beach.
At the weigh-in he was 47.84 lbs, which earned us third place out of 700 boats, not to mention over $16k.

Just short of the dream we all have of someday winning King of the Beach but still an epic day.” 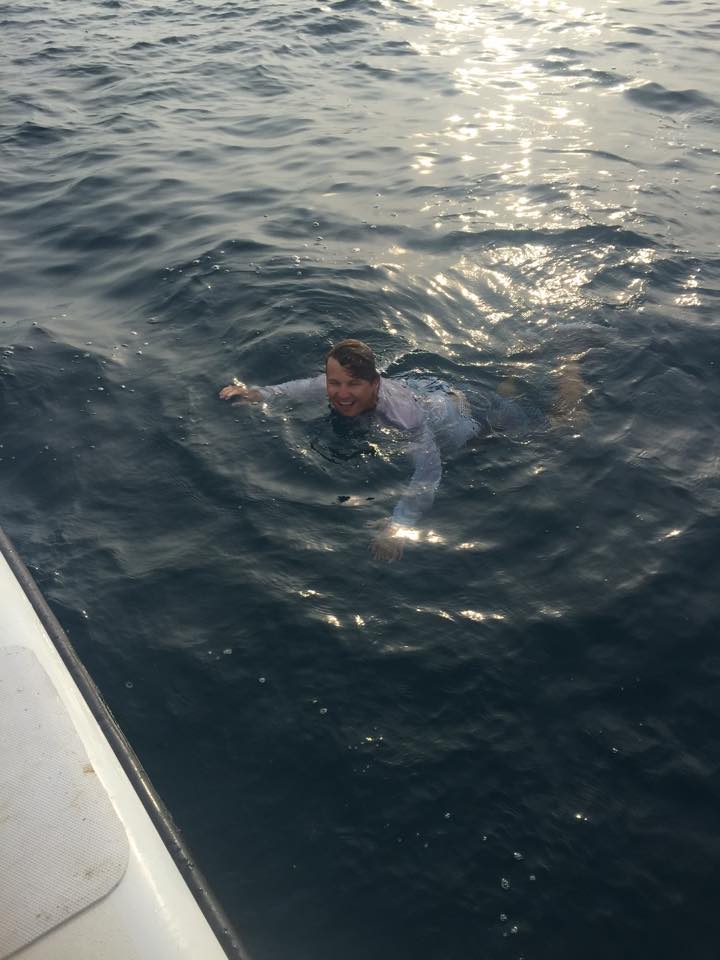 While Ed did manage to get back to the surface, any number of things could have gone wrong when you have so many factors going into play after getting ripped overboard unexpectedly. Luckily he’s not your typical fisherman and has experience being underwater without the ability to breath (he tells us in an interview he’s used to holding his breath for a long time underwater).

Outdoors 360 caught up with Ed and asked him about the tournament and how it compares to past experiences.

O360:  How long have you been fishing kingfish tournaments?

EW:  Been in Local King tourneys off and on for 15 or 20 years. We aren’t all that serious about it, just have fun with friends and maybe win something.

O360:  What’s your scariest experience fishing (before this)? I think it may be your stranded trip.

EW:  Scariest? Hmm. Had a huge herd off bull reds swim through us while freediving 12 miles offshore. The boat was anchored a good distance away. I thought it was kinda cool then I remembered what all the Greek sponge divers here in Tarpon Springs told me: “the only thing that will make them get out of the water while working is a school of redfish.” Behind nearly all of them is a bunch of sharks they said. I grouped together with my buddies and sure enough, right behind that school was a wall of sharks like I have never seen. Dozens, from 4 feet to 10 feet. They got all jazzed up looking at us, rising up on us, following us on the surface, zooming back and forth. Back to back with speargun in defensive position we slowly paddled back to the boat escorted by the fleet of sharks. That experience is probably right up there.

O360:  At any point did you think your life was in danger during this kingfish experience?

EW:  No, not for one second did I think about anything other than this fish getting in the boat. Even when I was fairly deep underwater being pulled around, nothing mattered except bringing the big fish that I could see at the other end off the gaff, to the surface. Found out afterward that I lost my glasses and hat. As a Freediver spear fisherman, being pulled around underwater by a fish isn’t that unfamiliar. Being pulled overboard with your boots on? That hasn’t happened to me before (laughs). The next bait we put out on that same spot got eaten by an amberjack which was then eaten by big sand bar shark. Not sure how that would have gone down had he come for our kingfish while I was down there but I would not have given it up without a fight.

The funny about this whole experience is that he never intended to enter the tournament in the first place. Usually Ed and his team prep days before the event.

“The tournament was a last-minute thing,” he said. “Usually we spend days scouting, catching bait … but we decided to enter the tournament the night of the captains meeting. Under normal circumstances, we’d run all over, but this day we just stayed close to shore.”

More preparation time means more chances of catching that much sought trophy fish, but in this case, going out in an unplanned outing gave Ed and his team all they could have hoped for – a trophy kingfish and a great story.